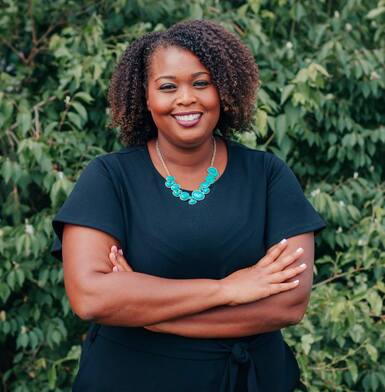 Hello! My name is Rochelle Alleyne. I'm a reporter for ABC Action News in Tampa, Florida.

Prior to my move to "Champa Bay," I was working just a few hours away as a reporter/mmj for Fox 4 News in Fort Myers, Florida. In my time there, I got to cover a few tropical storms, severe flooding and reported on the Wade Wilson murder trial extensively. I also found my passion for investigative journalism, which led to a lengthy series of stories on homelessness and on housing concerns at the Lago Del Sol apartment complex.

​Before that, I worked as a reporter and fill-in anchor for Spectrum News in Buffalo, New York (formerly Time Warner Cable News). From July of 2016 to July of 2018 I covered tornados, snowstorms (including national coverage with HLN), the Buffalo Bills, and dozens of major breaking news events. In my role there, I strengthened my ability to ad-lib during wall-to-wall breaking news coverage, work under tighter, stricter deadlines and form contacts within the community. But most importantly, my time in Buffalo only further confirmed my commitment and passion for journalism.

I got my start, post-graduation, as a reporter, anchor and producer for KXXV-TV in the Waco-Temple-Killeen news market from July 2015 to June 2016. While there I had the chance to cover everything from helicopter crashes at Fort Hood to home invasions and severe weather. In addition to operating as a "one man band" during the week, I also anchored and produced the station's weekend morning newscasts. In that role, I was responsible for stacking/timing the show, writing everything within the broadcast, gathering news elements and sending reporters/associate producers out to scenes as necessary.

I am a graduate of the University of Florida, with degrees in Broadcast Journalism and Political Science (Specializing in International Relations).

While in school, I worked as an mmj and anchor for WUFT-TV, a University of Florida and PBS affiliated television station. During that two year period, I was able to hone my skills in writing, interviewing, reporting, editing, anchoring, and preparing content for our online presence at wuft.org. In that time, I also worked as a nightside reporter for the Gainesville Television Network (GTN News), which provided me with extra real-world experience and included doing live shots.

One of the highlights of my undergraduate experience, was interning at NBC 6 South Florida, a station I grew up watching. Having the opportunity to be there, working alongside such dedicated and talented journalists was a completely surreal experience. As a morning news intern, I learned a lot about early shifts and weird sleep schedules. But even more importantly, my eyes were opened to the world of local news producing and I loved every minute of it. By the end of my Summer 2014 internship there, I saw a dramatic improvement in my writing, pitching, editing, producing and networking skills and am so grateful to have had the opportunity.

I really believe that my summer of 2013 internship with CNN Newsroom helped prepare me for NBC 6, as it truly allowed me to experience large-scale news production. I was there for so many pivotal news moments, such as the George Zimmerman trial, Edward Snowden's NSA leak, Paula Deen's racial slur scandal, the birth of Prince George and much more. As part of a news team there, I pitched, wrote, edited, researched, and gathered elements that were used on CNN's air. That summer, I learned a lot about myself as a person and as a journalist; and by working alongside some of the best in the business, I was challenged to raise my caliber of work. My favorite part of the entire experience was working as a field producer for Suzanne Malveaux's June 2013 interview with Former President Jimmy Carter.

As the former President of the UF Chapter of the National Association of Black Journalists (or Gator NABJ), I was also a contributing reporter and producer for "Zion Buzz,” the organization's online magazine, which was produced by various members of the organization.  In my spare time, I also worked as a reporter/producer for Florida's 89.1 WUFT-FM, a NPR North Central, FL affiliate (and University of Florida radio station). One of my favorite pieces that I did for WUFT-FM was my interview with former Florida Congressman, Don Fuqua. He is the last living Florida Congressman to serve during the passage of the Voting Rights Act in 1964.

Thanks for reading! Go Gators!